The General consensus is that Non-profit Governing Bodies could have as high as 80% of their governing body members who may never have sat on a Governing Body before.  The feeling is that these governing body members may not be aware of how onerous their appointment is, with respect to their fiduciary and statutory responsibility, corporate governance and due diligence issues.

OurGOVERNANCE was developed in the interest of making available to such Governing Bodies and their Chairpersons a tool through which they could individually review their understanding of their responsibility of being a Governing Body Member on such a Board, and embark on personal Governing Body Member Development. The core focus is to empower each Governing Body member with the knowledge to improve their application of this learning/understanding and in so doing improve the effective and efficient decision making that such a Board member has to make, plus to protect the investments made in the organisation by the Incorporators and Funders of such company.

The philosophy of corporate governance cannot rely on statutory requirements, generally accepted codes of practice and ethics alone, but must embrace social and economic transformation imperatives.  OurGOVERNANCE   is one way of beginning to address this with specific focus onto corporate governance standards, which are directed at three aspects of any enterprise’s activities, namely:

The under- pinning concept for Non-Profit Organisations and their Governing Body  is the propensity to serve and this is the essence of the corporate governance philosophy for non-profit organisations, which by their very definition of legal form, suggest a motive other than making profits for their investors.

OurGOVERNANCE   was conceived out of the need for competent, knowledgeable and effective governing body members to be at the helm of Non-Profit Organisations (NPOs).

An easy solution could have been to simply bring together all the publications of professional institutions, the codes of good practice and various summaries and commentaries on legislation, and to extract and reconfigure only the text relevant to such entities within a new format.  This approach would, however, not have encapsulated the intent and ethos of a governance standard for the spirit of service and dedication to the greater good that characterises responsible stewardship governing body membership within a public enterprise having no shareholders.  The King Report qualifies that its recommendations are aimed at business enterprises of a certain size and one of its fundamental premises is that entrepreneurship and enterprise are among the most important factors that drive business.  Enterprise is defined as “the disposition to engage in undertakings of risk for profit”.  This philosophy of corporate governance is derived from the notion that governing body members must act in the best interest of the corporation and thereby ensure that through their enterprise and integrity, the company’s investors be rewarded with acceptable profits.  Governing body members are regarded as being individually and collectively responsible to the shareholders.

Clearly then, the philosophy of corporate governance for organisations with a purpose other than the undertaking of business with risk for the acquisition of profit, must be based on a different value system.  The challenge confronting the composition of such a corporate governance model was to find a credo or ethos that expressed the true spirit and purpose of public entities without shareholders and share capital, by which their very choice of legal form suggests a motive beyond the bottom line.  This value statement provided the objective of a study to construct a corporate governance model based on the legal, ethical and duty provisions of contemporary codes, but with a philosophy of service.

OurGOVERNANCE contains many points that can be found in most of the available publications, which in any event are merely extracts from or references to King IV, and other legislation governing the direction and management of Organisations.  It does offer a more concentrated and directly relevant content, but most importantly emphasises the propensity to serve the aims of the corporation, the imperative of delivery and the respect of diversity among its people as values esteemed above the dispensation to take business risk for profit. 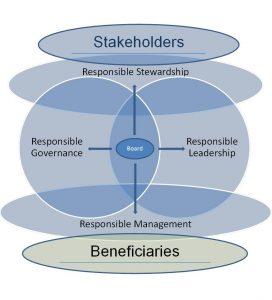 OurGOVERNANCE is a model for Non Profit Organisations, i.e. there are no shareholders.

The programme was developed because of the need for competent, knowledgeable and effective Governing body members and Executives to be at the helm of Non-profit Organisations.

The business company is driven by enterprise, defined as “the disposition to engage in undertakings of risk for profit”.

The social or public service organisation must be driven by a different ethos, and no better one can be found than the value of “batho pele” which underpins the new coat of arms.  This is a Sesotho phrase meaning “people first”

If “people first” is the credo, then the Non-profit organisation can only be driven by ‘a propensity to serve’.

The 1995 white paper on the transformation of the public service expressed a heart cry of a nation to the ideal of excellence of government and civil society based on four tenets:

These tenets still hold true today. OurGOVERNANCE allows for the diversity of people that will serve on primarily Non-Profit Organisations Governing Bodies and for the different worldviews and philosophies that they will bring with them

The emphasis is therefore on THE NEUTRAL NEED for responsible, informed decision-making, service delivery and accountability.

The content of the study guide is grouped under four modules covering fifteen sections:

Module 1 – Introduction to corporate governance, and the nature of the Non-profit Organisation.

Module 2 – Duties and functions of a Governing Body .

The essence of ourGOVERNANCE   is that once the Governing Body Member of the Non-profit has registered with ‘third sector insights’ they will gain access to not only their personal development programme through ourGOVERNANCE, but they will also have access to the ‘Non-Profit Leadership and Applied Governance forum’ and will receive regular ‘third sector insight’ updates with the latest and relevant information globally and locally, specifically on Non-profit issues.

The Governing Body Member can in the privacy of their office or home and in their own time, work through the study guide and conduct the self assessment at the end of each module. This will positively allow the Governing Body Member to gain an understanding of their areas of further research and study to assist them in improving their knowledge of Governing body membership and Corporate Governance and the true application of responsible stewardship.

The Non-Profit Leadership and Applied Governance forum will allow the Governing Body Member to interact with other registered members and engage on issues relevant to their tenure as Governing body members of Non-profit Organisations. The regular updates will add value in their personal development and keep them abreast of global and local issues affecting the Non profit sector which may have a bearing on the organisations they are privileged to be a Governing Body Member of.

MODULE ONE – COVERS THE FOLLOWING:

The objective is to bring greater understanding of the implications of governing body membership so that they will be enabled to fully and effectively meet their obligations and act as responsible stewards.

In this context, it advocates and promotes superior governing body performance through the greater level of understanding that governing body members will acquire of their role.  It is based on the positive aim of enhancing performance and not on the negative of preventing failure.

Of interest is that profits may be made but can only be applied to the object of its registration.

The NPO landscape in South Africa has different types of NPO’s which can be established, and this section explores the nature of these organisations with a particular focus on these questions:

Is derived from the incorporators/founders and this can be found in the relevant founding documents.

This stresses that all Organisations have a variety of stakeholders with vested interest in its performance and ongoing success.  The key stakeholders and ultimate beneficiaries are described

Simply being the parties who signed the founding documents submitted with registration.  They have no entitlement to any profits made.

This module has 6 sections with 28 of 100 questions in the self assessment.

Is stated as being the body through which the organisation acts, and its main responsibility is to ensure that the company sticks to its purpose and operates in compliance with all laws.  Governing body members must be given all-important strategic and contractual documents on their commencement of duty.   The board must retain full and effective control over the company and ensure that they take all material decisions.

The main functions, duties and responsibilities of the governing body collectively, as distinct from individual roles, are highlighted.

To perform with utmost loyalty, good faith, care, skill and attentiveness. Governing body members must always be sure that they have sufficient information and time to make well informed decisions.

Sets out the rights, duties, obligations and liabilities of a Governing Body Member.

Sets out guidelines for the role and effectiveness of the chairperson.

Primarily to manage the process, protocols, productivity and effective decision making of the board meetings and to ensure that all governing body members fully participate.

This module has 3 sections with 27 of 100 questions in the self assessment.

Emphasises that Governing Body effectiveness refers to the performance of the governing body members not only in their meetings, but also to their consistent attention to and carrying out of duties and responsibilities throughout their term of office.

Effectiveness begins with the selection and appointment of the right people. There should be no element of tokenism or cronyism in appointments.  Dedication cannot be fabricated or faked.

Political behaviour, being behaviour that is not sanctioned by the governing body or does not serve the objectives of the organisation, must not be condoned.

Governing body members must abide by final decisions of the governing body, but may have their reservations placed on record.  Recommends that the board subject themselves to regular self and outside appraisal.

States that the governing body is required to appoint managers to operate the business on a day-to-day basis and to set up ad-hoc and standing committees, e.g.

Managers must have appropriate authority and approval frameworks, be fully informed and enjoy governing body support to act within their powers and limits of authority.

Confirms the governing body responsibility to ensure that all employment legislation is complied with.  The common law and constitutional rights of individuals must also be respected.

Employees must have formal contracts.  The organisation can reasonably expect certain standards of behaviour and performance from their employees.

This module has 3 sections with 22 of 100 questions in the self assessment.

In terms of the Companies Act 2008, it is required of every company to appoint an auditor.  If not done, every Governing Body Member is guilty of an offence.  The role and duties of auditors are set out.

The Act also requires that accounting records be kept by the company and these are listed in this section.

The auditors must satisfy themselves that records have been kept, minute books and registers have been kept and that the financial statements reflect the true state of the company’s accounts.

Take into account the implications of the Organisations Public Interest Score  as well as what is contained in the founding document in this regard.

Negligence, fraud or recklessness may result in civil and criminal action against them.  The removal of a Governing Body Member must follow certain procedures.

Acts of governing body members remain valid despite defects found afterwards in their appointment or qualification.

Ethics and morality pertaining to business are defined and it is confirmed that it is the responsibility of the governing body members to determine the moral and ethical climate of the organisation.  The subject of shared values is also dealt with.

A code of conduct is applicable to everyone in the Organisation.

The code must be made available to all. Each organisation should specify its own code of behaviours and ethics.

This module has 3 sections and 23 of 100 questions in the self assessment.

Login
Accessing this course requires a login. Please enter your credentials below!
Lost Your Password?